The Houston Film Commission hosted a special screening event, “Texas Filmmaker’s Showcase” consisting of the best of Texas-made short films presented to industry professionals in the Hollywood film community. The Filmmakers whose projects were selected to participate were flown from Texas to Los Angeles and provided with one evening accommodations and transportation to and from the screening.

The Screening was accompanied by a reception where filmmakers and industry professionals visited with each other to discuss filmmaking, financing, distribution and other aspects of the movie business. 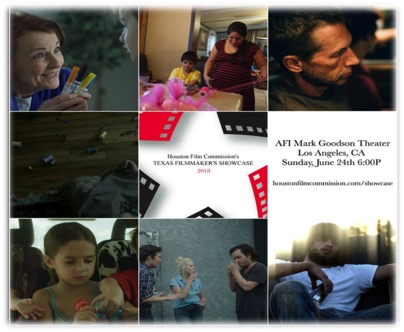 Featured In the photos:

The Backup Plan
Daniel Earney - Austin, TX
When a down-on-his-luck single father faces eviction, he begins stealing catalytic converters to save his home.

Calling
Artemis Anastasiadou - Austin, TX
Valeria, a Mexican American seamstress and mother of an intellectually challenged man is sexually assaulted one night by her employer. The film explores the next few hours after the event, the struggles of Valeria to take care of her son till she makes the final call.

Caroline
Celine Held & Logan George - Houston, TX
When plans fall through, a six-year-old is faced with a big responsibility on a hot Texas day.

The Heights
Ryan Booth & Henry Proegler - Austin, TX
A promising musical duo tries to avoid a meltdown before the biggest show of their career.

Liquid Soul
Allen Phillips - De Kalb, TX
Heartbroken and high on huffing gasoline, a psychotic fuel tanker driver plots revenge on the girl that broke his heart, her whole family, and their dog.”