Visitors and residents will be greeted with renewed artistic imagery during their daily strolls through Sesquicentennial Park thanks to a collaboration between Houston First Corporation and local artist Dean Ruck on an art restoration project that is now complete.

The project features 15 porcelain panels of historic photographs ─ known as “Site Seeing” ─ that adorn the park’s balustrade columns leading from the Smith Street Bridge to Buffalo Bayou. The “Site Seeing” panels represent 15 decades of Houstonians past and present celebrating their diversity, eclecticism, ambition, and pioneering spirit. New materials and printing technology allowed Ruck to replace the original printed steel and wood with a durable polymer board and adhesive. The panels’ backgrounds, which display brief didactic texts written by the artist, were also updated for legibility and to accurately depict the city’s diverse communities.

Established in 1989, Sesquicentennial Park was created to commemorate the city of Houston’s 150-year anniversary. Its Houston Theater District location makes it a great option to enjoy nature or host a special event that provides stunning views of the downtown skyline. Some of the park’s highlights include cascading waterfalls, distinctive lighting, a gazebo and promenade, hike-and-bike trails, boat launches, a President George H.W. Bush monument and seven 70-foot pillars that pay tribute to Houston’s past and present.

In addition to the works at the park, Houston First Corporation contracted with Conservation and Restoration of Sculpture to conduct a thorough cleaning and waxing of the Mosbacher Bridge bas-relief bronze portraits of Robert A. Mosbacher Sr. and lightening of the plaque’s text for legibility.

About Houston First
Houston First is the official destination management organization for the city of Houston. In addition, Houston First owns the Hilton Americas-Houston hotel, manages the George R. Brown Convention Center along with 10 city-owned properties and developed the Avenida Houston entertainment district. 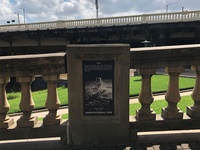 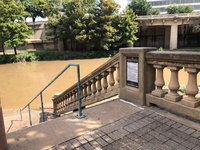 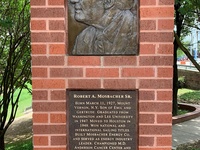 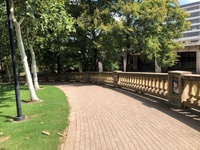